The surface quality of a two-dimensional shape or three-dimensional volume is called texture.  Texture engages our sense of touch as well as our vision.  It can enhance visual surface and conceptual meaning to a design.   There are several types of texture, physical or actual texture, simulated texture, invented texture and subversive texture. Actual texture is can be felt, such as woven canvas or then bumpy texture of wood. Simulated texture is created by making multiple marks, dots or hatch marks and is seen but not felt.   Invented texture has no direct reference to perceived reality.  Subversive texture refers to actual or visual texture that contradicts our experience or expectations about a surface.

Repetition occurs when we use the same visual element or effect over and over.  Visual texture is created whenever lines. Dots or other shapes are repeated.  Variations in the size, density, and orientation of these marks can produce different spatial effects.  Larger and darker marks tend to advance outward, while finer tightly  packed marks tend to pull us inward. 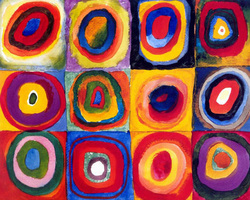 Squares with Concentric Circles by Wassily Kandinsky, 1913 is and example of Unity through the repetition of shape.  The repeated circles create a cohesive design despite the wide range of colors used.  Repeated textures in the above works  also create uniity in each work.
Rhythm

Rhythm is a sense of movement that is created by repetition of multiple units in a deliberate pattern.  Visual rhythm is similar to musical rhythm.   In music, rhythm is created through the organization of sound and time.  Meter, the basic pattern of sounds and silence, and tempo or speed can be combined in infinite possibilities.

The repetition of any thing — shapes, lines, or colors — also called a motif, in a design; as such it is one of the principles of design. Pattern is an underlying structure that organizes surfaces or structures in a consistent, regular manner. Pattern can be described as a repeating unit of shape or form, but it can also be thought of as the "skeleton" that organizes the parts of a composition. Compositional grids are most commonly created using vertical and horizontal lines.

Pattern exists in nature as well as in designed objects; it is useful to look at the parallels. The grid can be the foundation for any structure or image. There are set of ways in which the points of a grid can be connected. These modes of connection become classes of pattern, which he claims can be seen in any situation, in nature and in made images, and from the microscopic to the cosmic scale.
There are ten classes of patterns, each with a particular function, that make up the entire physical world — natural and human-made — at all scales:

The modes are described as examples from nature. However, each of these modes can also be seen in examples of designed objects and works of art:

Linocut, a type of relief print, is the earliest printmaking technique, and the only one traditionally used in the Far East. It was probably first developed as a means of printing patterns on cloth, and by the 5th century was used in China for printing text and images on paper. Woodcuts of images on paper developed around 1400 in Europe, and slightly later in Japan. These are the two areas where woodcut has been most extensively used purely as a process for making images without text.

The artist draws a sketch either on a rubber plate or on paper which is transferred to the plate. Traditionally the artist then handed the work to a specialist cutter, who then uses sharp tools to carve away the parts of the block that he/she does not want to receive the ink. The raised parts of the block are inked with a brayer, then a sheet of paper, perhaps slightly damp, is placed over the block. The block is then rubbed with a baren or spoon, or is run through a press. If in color, separate blocks are used for each color.

Artists using this technique include;

Print your block using the following.  Use a square block plate. Plan your plate carefully.  Print each of the four examples on its own paper using your choice of colors, making a unique pattern.